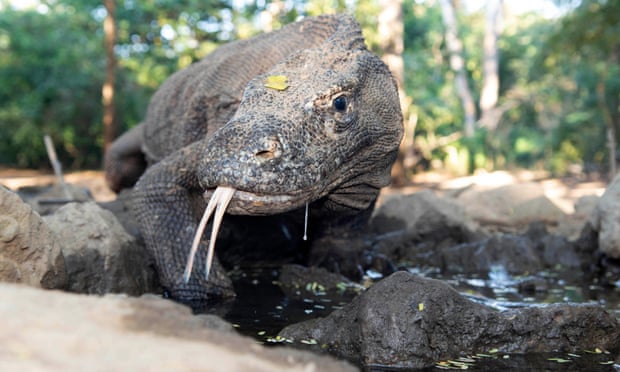 The komodo dragon, the world’s largest lizard, is threatened with extinction as rising water levels driven by the climate crisis shrink its habitat, according to the latest “red list” update.

Endemic to a handful of Indonesian islands, the komodo dragon lives on the edge of forest or in open savannah, rarely venturing higher than 700 metres above sea level. Rising water levels are set to affect 30% of its habitat in the next 45 years, according to the International Union for Conservation of Nature (IUCN), which has changed its status from vulnerable to endangered.

The update – announced at the IUCN world conservation congress in Marseille – is the first for the komodo dragon in more than 20 years. It comes after the first peer-reviewed paper on how global heating would affect the giant lizards concluded “urgent conservation actions are required to avoid risk of extinction”.

As well as being unable to move to higher ground, the komodo dragons’ habitat is becoming increasingly fragmented by human activity, which makes populations less genetically healthy and more vulnerable. Their habitat range on the island of Flores in south-eastern Indonesia is thought to have shrunk by more than 40% between 1970 and 2000.

“Because of human pressure, the forest is slowly being cut down and disappearing, and the savannah is affected by fires and degradation. That is why the animals are really in small little pockets,” said Gerardo Garcia, curator of vertebrates and invertebrates at Chester Zoo. “Habitats are being made even smaller due to rising sea levels.”

Europeans discovered komodo dragons only in the early 20th century and were immediately fascinated by the creatures. Growing up to 3 metres long and weighing more than 150kg, komodos feed mainly on forest-dwelling pigs, deer, buffalo and fruit bats which hang in the low-lying mangrove trees. When they attack, their venomous saliva causes their prey’s blood pressure to suddenly drop and stops it clotting, sending them into shock. Despite their gory credentials we still know little about them because they’re so shy.

“It is the most charismatic reptile on the planet yet until last year we didn’t really know where the komodos lived,” said Garcia, who was part of a three-year project with the Indonesian NGO ​​Komodo Survival Programme that involved using camera traps to work out their movements. They discovered where they were living on Flores and now hope to do more focused conservation and community work in those areas. The subpopulation in Komodo national park is currently stable and protected.

Out of 138,000 species on the updated IUCN red list, more than 38,000 are threatened with extinction. The organisation also included a comprehensive reassessment of shark and ray species, with 37% now threatened with extinction due to overfishing, loss of habitat and the climate crisis. Sharks and rays are also burdened by the bad luck of their biology – they reproduce slowly and in low numbers, which means they are slower to bounce back compared with other species .

The IUCN red list update included some good news – four out of seven species of commercially fished tuna – Atlantic bluefin, southern bluefin, albacore and yellowfin – are on the path to recovery, thanks to the introduction of fishing quotas in the past 10 years.

“The new ratings certainly do bring some good news,” said Grantly Galland at the Pew Charitable Trusts. “Management has improved for bluefin tuna and albacore around the world in the past decade but we do still offer some caution in that IUCN ratings are based on entire species and it doesn’t allow for the assessment team to look at genetically distinct populations.”

For example, Atlantic bluefin is of least concern, but the western Atlantic population continues to experience serious declines, and is still at threat of being lost entirely.

The success of albacore and southern bluefin tuna is due to the introduction of “harvest strategies” where the managers determine ahead of time what rules or actions they will take based on the status of the stock, and these new ratings are proof that those strategies are working.

Galland said: “When fishery managers are focused on a particular problem and dedicate efforts to fix that problem, they are able to do that, including reducing fish quotas when stakeholders don’t want them lowered. This shows that when we take those difficult decisions and focus on recovery we can actually achieve that.”

This article by Phoebe Weston was first published by The Guardian on 4 September 2021. Lead Image: The komodo dragon has moved from vulnerable to endangered on the IUCN red list. Photograph: Gerardo Garcia/Chester Zoo.