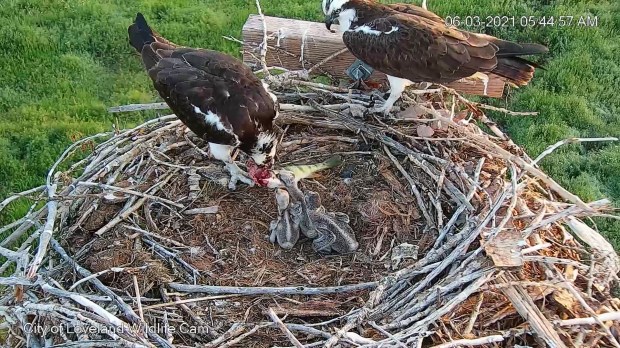 Wildlife officers are investigating the shooting of an osprey, the male half of a pair nesting on the south side of Boedecker Lake west of Loveland, leaving wildlife specialists worried for survival of his young.

Male and female ospreys work together to raise their young until the new raptor is able to hunt on its own and migrate for the winter. In this case, the raptor was still too young to take care of itself.

“The males are the main provider of food to both the adult female mate as well as the young up until migration,” Eley explained.

“As soon as the male from the Boedecker nest was killed, the other osprey pairs began moving in to claim the nest. The juvenile osprey from the nest was kicked out of the area immediately.”

She and other naturalists are worried for the survival of the young raptor, and she explained that these birds, like other wildlife, have their own important role in a balanced ecosystem.

“All birds of prey provide different types of services in an ecosystem,” Eley said. “They are keeping everything in check. They just keep it in balance.”

This particular raptor was shot on Aug. 22, a Sunday morning.

“It was discovered by some landowners in the area … who saw it happen,” Eley said, noting that the residents called to report the shooting, and both the Larimer County Sheriff’s Office and Colorado Parks and Wildlife officers responded.

County deputies tracked down two juveniles they believed were involved, and then turned the case over to the state wildlife officers, according to a Sheriff’s Office spokesman.

“The suspects in this case have been identified, and there is still an active investigation taking place,” Jason Clay, spokesman for Colorado Parks and Wildlife said in an email. “We can (share) more on it with details once that gets resolved. Because they are juveniles, we cannot share further information at this time.”

It is illegal to shoot raptors in Colorado, and one potential charge someone could face for killing an osprey would be illegal taking of wildlife with a fine of up to $200 as well as potential impacts on a person’s ability to hunt. Much like a driver’s license, hunting licenses have a points system.

“Osprey are not a game species,” Clay explained. “They can’t be hunted. They cannot be taken that way. They also are protected under the migratory bird act, which is a federal act.”

Clay said that wildlife officers do get reports of people shooting raptors for different reasons, though he could not go into the motivation behind this incident. He mentioned another osprey shooting in northwest Colorado this summer as well as the killing of turkey vultures in Longmont.

Eley said that shooting “is the number one cause of the demise of osprey.”

She, and Clay, urged people who witness others harassing or shooting at raptors to report it to Colorado Parks and Wildlife at 970-472-4300. After hours, call the Colorado State Patrol at 303-239-4501 and ask for the on-call wildlife officer for region 2.

Tipsters also can report incidents through Operation Game Thief by calling 1-877-COLO-OGT, by dialing #OGT on Verizon cellphones, or by emailing game.thief@state.co.us​​.

In addition to shooting, Eley mentioned two other ospreys in the Loveland area have been killed this year after becoming entangled in discarded fishing line or baling twine and “additional deaths occurred due to collisions with cars or fences and various other causes.”

“These deaths are unfortunate and many are avoidable with a bit of caution and common sense” Eley said in an email. “Residents should pick up and properly dispose of litter to protect birds and wildlife.”

In fact, the city of Loveland hosts an osprey nest cam on its website where residents who are curious about these raptors can get an up-close look — safely and without endangering the wildlife — at the eggs hatching and the parents caring for the young until they are ready to leave the nest for the season.

Eley urges residents to respect the raptors, to enjoy them from afar (or via camera), and also to take some other measures to protect Loveland’s nesting osprey so they return year after year.

This article by Pamela Johnson was first published by The Loveland Reporter on 2 September 2021. Lead Image: This photo from a city of Loveland wildlife camera that allows residents to watch an osprey nest shows the male raptor feeding his young with fish that he caught. The male and female raptors care for their young together, though the males are the primary providers of food for the baby birds as well as the adult females. (Courtesy of the city of Loveland).